BSC was launched on 4 Apr 12, attracting good publicity including an interview of its chair Sir Ronald Cohen on BBC Radio 4's TodayProgramme

The Economist ran this editorial a few days previously, on 31 May 12. 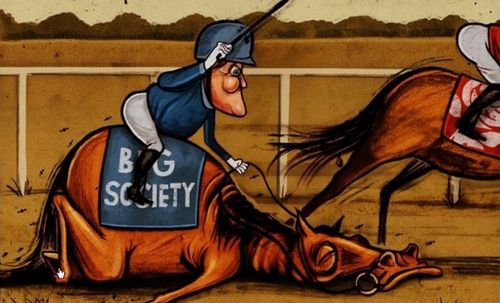 The Big Society was once David Cameron’s warmest and fuzziest idea—that community spirit can solve social problems better than the state. Ministers rarely mention it now. Yet in early April the slogan is being backed with cold, hard cash, via the launch of Big Society Capital (BSC), a social investment bank that will eventually be capitalised with about £600m ($955m), two-thirds of it harvested from dormant bank accounts and the rest injected by the four biggest high-street banks.

The goal of BSC, which will be run independently from government, is to create a market for “social finance”, a hybrid investment class that delivers a mixture of social and financial returns. The idea is not new. Britain is already home to the world’s first “social-impact bond”, a £5m instrument that funds a prisoner-rehabilitation programme in Peterborough and only delivers returns to investors if recidivism rates hit certain targets. Plans are afoot to use other social-impact bonds to fund therapeutic work with troubled families.

HCT Group, a transportation firm, also blends commercial and social aims. It reinvests a third of its profits into social schemes such as training for unemployed people. Dai Powell, HCT’s chief executive, attributes part of its success to the fact it does not have shareholders to satisfy, which means it can accept lower margins on tenders. As well as bank loans and asset-backed financing, it has an equity-like loan whose interest rate is based on turnover: investors get paid more when HCT earns more.

But such examples are rare. There is a particular shortage of “risk capital”—the sort that gets wiped out when things go wrong—for social enterprises. Charitable donations and the state are alternative sources of funding, but one is unpredictable and the other is stingy. Big Society Capital aims to plug the gap, not by investing in social enterprises directly but by funding intermediaries that will.

Nick O’Donohoe, the institution’s boss, gives the example of BSC leading a team of investors to capitalise a “payment-by-results” fund designed to invest in social impact bonds. Among other things, an interim investment pot has already put money into a project called the Social Stock Exchange, which plans to provide a platform for social enterprises to raise capital. Seeding these kinds of initiatives should enable BSC to multiply the overall amount of money being pumped into the sector. Mr O’Donohoe says his long-term aim is to attract £4 for every £1 BSC spends, to create a market worth £3 billion.

That is ambitious. A study by the Boston Consulting Group and the Young Foundation, a think-tank, found that the social-investment market was worth just £165m in 2010-11. There is a risk that BSC will have so much cash (perhaps £100m in its first year) and so few decent places to invest that money will be wasted. That would be hugely damaging. There is a big idea here—one that, by muddying commercial incentives and social objectives, is unsettling and appealing to left and right in equal measure. The best way for BSC to prove the worth of social investment will be to make money on its own deals.