Sunderland Home Care Associates (SHCA) is an employee-owned company that provides domiciliary care to elderly and disabled people in Sunderland in North-East England. It has achieved some celebrity in social enterprise circles because of the way it applied innovative human resource techniques to the issue of modernising public service delivery to respond to demographic change.

It was the first social enterprise to be involved in the work of the INSPIRE project on social franchising. This has led to several spin-off companies being established in other towns in North-East England. They are linked through a common franchisor called Care & Share Associates (CASA).

As lifespans lengthen and technologies for independent living improve, more and more elderly and disabled people can be cared for in their own homes instead of moving into institutions. The vast majority of people prefer this, and it represents a revolution in the way care is provided. First, it implies a rapid increase in the quantity of care that is required. In the first half of this century, the share of over-65-year-olds in the EU population is set to double to 30%, while the share of over-80s will more than triple, to 12%. As much of the cost of this is borne by the public purse, this puts a premium on cost-effective delivery if tax rates are to be kept under control. And it is not only elderly people who are involved: in the EU there are several million people with disabilities, who need care in their homes. In their search to find a cost-effective way of providing high quality care, public authorities have turned to outsourcing, and an increasing share of care budgets is allocated through a process of tendering.

Founded in 1994, SHCA is now the biggest home care provider in Sunderland. It serves 500 clients and employs some 175 people, who deliver around 3,700 hours of care each week – in other words they work on average about half time. All but about 20 of the staff are women, and this flexibility of working time is a very important factor for them, especially those who already have family caring responsibilities.

The company has diversified out of home care. One service it offers is academic support, which is a service paid for by the local education authority, through which students with disabilities receive assistance in attending lectures and completing other study tasks. SHCA also provides short-term cover in residential care homes when they face a staff shortage.

In the care sector more than most, the carer’s involvement and commitment to the service quality is a key criterion of success. This is why SHCA adopted an employee ownership structure. Quality is a key competitive factor, and SHCA finds that its employee-owned structure enables it to attract a high-quality workforce and to offer them high-quality jobs, with above-average terms and conditions and workforce training. This builds loyalty: the staff turnover of only 3.5% a year means it can provide a high level of continuity of care. The company constantly monitors the service it is providing, and employs four supervisors who are continually making the rounds to ensure that quality is up to scratch. Users are also asked to comment on their level of satisfaction with aspects such as the carers’ timekeeping and disposition.

Paradoxically given the quality it brings, industrial democracy has a regulatory cost. Each British care organisation has to be approved each year by the Commission for Social Care Inspection, which costs several thousand pounds. Each relatively small employee-owned company has to bear this cost separately, while competing large companies only have to be approved once,and therefore have a cost advantage. The approval process is also very bureaucratic and delays the launch of each new company, SHCA finds. 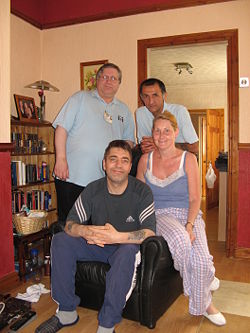 Clients appear to approve of employee involvement in care. One of SHCA’s clients is Peter Usher, a multiple sclerosis sufferer who lives in Pallion, near the centre of Sunderland. Carers Stan Hartley and Jimmy Cook visit four times a day to help Peter to get up, washed and dressed, and to go out to the shops, to the barber’s and so on. Twice a week, they come for a longer period of four hours, which allows his wife Debbie, who has had to give up her job to look after him as his disability has progressed, to go out. the couple had the choice of employing a carer themselves, from among family and friends, but did not want to have to manage tax and national insurance. They therefore chose to use SHCA, which means they can stay with the same carers. The Ushers are one of the relatively few families on the ‘direct payments’ system, which means that they receive an allowance from Sunderland City Council, which they use to pay SHCA’s bills. The UK government reportedly aims to see half of all home care within the direct payments system, which could mean that the market for independent care providers will expand.

From co-operative to employee-owned company

The founder of SHCA, Margaret Elliott is a trained youth worker and was one of the pioneers of the ‘new wave’ of workers’ co-operatives that set up in Britain from the 1970s onwards. In 1974, she helped to found Little Women, whose main business was cleaning. Then in 1983 a local co-operative activist suggested the idea of starting a home care co-operative – and shortly afterwards Little Women Household Services was born. It served clients who were not eligible for local authority home help services, and financed its operations by negotiating on the clients’ behalf for a supplement to be paid on top of their pensions. The clients would then pay the co-operative, and would not be made to feel they were receiving charity. Unfortunately, this financial model came unstuck when benefit payments were cut in 1986, and the co-operative closed.

But, following the publication of the British government’s Griffiths Report – Community care: agenda for action – in 1988, another great opportunity opened up for co-operatives. Ms Elliott got in touch with Robert Oakeshott of Job Ownership Ltd (JOL), a national organisation promoting employee ownership. He suggested making a study visit to Cooperative Home Care Associates in New York, and Ms Elliott spent three days in the Bronx, and also visited a care business in Philadelphia. Back in England, Sunderland Borough Council published a call for tenders for care services – and SHCA was one of the seven successful bidders. Its first contact was to deliver 450 hours of care per week, and it was able to recruit 18 care workers, mainly long-term unemployed people and women returning to the labour market. The Tyne and Wear Development Corporation helped the new company out with a grant of £11,000 (€16,000) for computers, and SHCA started trading in the middle of 1994.

The company started life structured as a workers’ co-operative, with the assets owned in common by the employees on an equal basis. But in 2000 it transformed itself into an employee ownership company. This means that each year the employees are given a certain number of shares in the company, on which they do not have to pay any income tax if they keep them for five years. The company also receives corporation tax relief on any money it gives to the employee trust to buy these shares, so it is a very tax-efficient way to incentivise the employees.

Employees – and only employees – can trade shares at an internal market that is held each June, but not many take up this option: in 2006 there were 16 sellers and eight buyers of shares. The share price is set by the company's accountants, and over the firm’s short life has risen threefold, so rewarding loyal service.

The company’s democratic ethos gives its employees a real say in their conditions of work. For instance each year they meet to review the annual financial projections, and decide how pay should be structured – for instance whether any available money should be used to raise basic rates or to increase pay for working in evenings or at weekends. It is a single-stakeholder model: unlike social co-operatives on the Italian model, the clients are not members.

The number of shares each employee receives is decided by a committee of five people. At first the company used length of service as a criterion, but now it just depends on salary up to a ceiling of £15,000 a year. As a result, it has a relatively low staff turnover, which in turn helps to keep quality levels up.

In June 2009 SHCA was rated as "the 5th-fastest-growing company in health and social care" by the RBS SE100 index. Its turnover had risen by 30% to £2.33m over the year. SHCA also scored 2/5 on impact measurement. (Source: Social Enterprise, April 2009 Further information at http://se100.co.uk)

Caring and Sharing: the co-owned route to better care by Dave Wheatcroft: [2]

Is employee ownership the future for social care? by Simon Birch on the Guardian Co-operatives and Mutuals Hub, 31 May 13 [3]