Union Gewerbehof is a value-based enterprise centre in Dortmund, at the eastern end of Germany’s Ruhr industrial area. It rents out 5,000 square metres of workspace, supporting 250 jobs. Started in 1986 by a group of unemployed people who squatted a semi-disused steelworks building, it is now financially self-supporting and forms the nucleus of a neighbourhood renewal scheme which could see it double in size over the next three years. 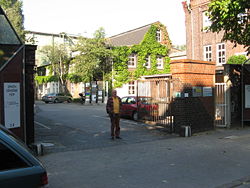 The centre has a remarkable history. In was started in 1986 by a group of 13 young unemployed people, many of whom had taken part together in a job creation scheme (ABM or Arbeitsbeschaffungsmaßnahme). Wishing to created work for themselves, they looked for premises and identified some office buildings that were standing semi-idle and formed part of the enormous site of Hoesch-Estel steelworks, which specialises in making sheet piling. They took them over – and after protracted negotiations, the company agreed to let the group use the buildings, paying just the cost of heating and power. On their side was the local trade union – a union which, under Germany’s system of co-management or Mitbestimmung, had a representative sitting on the steel company’s supervisory board.

The group set about the job of developing business ideas. This was the era when there was much talk of the conversion of arms factories to social useful production, by such movements as the Lucas Aerospace shop stewards’ committee. It is no surprise that many of the initial business ideas were ecological in nature, and included a building firm and a shop selling ecological building materials – the Ökomarkt. Ironically, today both of those businesses have disappeared, but not because they have failed – far from it. The building firm, whose first job was the extensive renovation of the Gewerbehof itself, has moved away to larger premises. As for the Ökomarkt, it is a victim of its own success: today, environmentally friendly building materials are a mainstream market, and are on sale in the city centre, so there is no need for premises in the Gewerbehof. Some of these new businesses gained support from job creation or economic development measures. 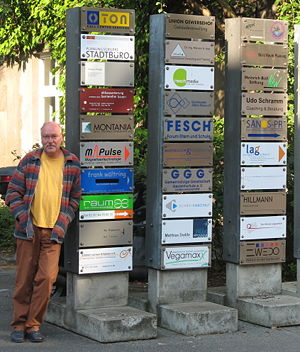 Photo: Manager Hans-Gerd Nottenbohm alongside the nameplates that show the range of enterprises that are Gewerbehof members.

The group started as an informal association, but renovating the premises required a loan, and that meant creating a legal structure. The first choice would have been a co-operative, but at that time the established Genossenschaft movement would not admit them. It adhered strictly to the principle that co-operatives are mutual aid organisations, not organisations with a social mission – a position that today has been softened. The centre was therefore incorporated as a share company – the Union Gewerbehof für Umwelt- und Sozialverträgliche Techniken (‘Union Business Centre for Environmentally and Socially Responsible Techniques’). Though it is a GmbH, its constitution embodies several co-operative provisions – for instance one person one vote. Following the model of the workers’ co-operative, membership was open to all those who work for and in the centre. This co-operative structure still applies today, but with the addition that corporate tenants can also become members.

The company raised its capital by selling shares. In a remarkable demonstration of the power of self-help, almost all the capital came from the members themselves – a total of DM 100,500 (€51,000) in 67 shares of DM 1,500 (€767). Remarkably, the founders did not want to approach outside organisations for financial support, and the only part of the capital that was contributed by an organisation was some DM 20,000 invested by an association linked to the trade union.

The renovation was carried out with the help of a grant from the Land of North Rhine-Westphalia of 4 million marks (€2.05m), along with minor assistance from the city’s economic development department. It was complete by 1992, and the slogan “100 jobs for Dortmund” could become a reality.

Over the years, businesses have come and gone. The largest tenant today is a call centre answering enquiries for the Deutsche Bahn and local public transport operators, which employs 100 people. Other relatively large employers are a training centre for deaf people and a car-sharing company. But most of the tenants are micro-enterprises or single self-employed people, many of them in sectors such as training and consultancy. The centre has however housed industrial tenants such as a printing press. 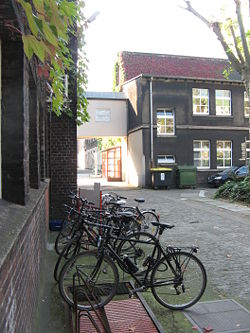 The Gewerbehof has a very simple operational model. It does not need to advertise for tenants, and despite a higher than average turnover of tenants, space rarely stays empty for longer than a month or two. The city council’s economic development department refers many tenants. The only services formally on offer apart from space and utilities are meeting rooms, toilets, photocopier and coffee machine. There is also a vegetarian canteen, but that is run as a separate self-supporting business. So what attracts people to the Gewerbehof? Manager Hans-Gerd Nottenbohm puts it down to the friendly atmosphere: “People can sit here in the courtyard and talk, and there is a special atmosphere,” he says. “People notice it isn’t like an ordinary office building – there is joint activity, ex-workers come to visit, things like that.” Information circulates via notice boards and a computer mailing list, and there is the occasional shared beer or birthday party. A crèche is about to be opened. There are no gimmicks, just good old-fashioned friendly support and networking.

And it is a model that works. With an annual income of around €300,000, the Gewerbehof supports itself financially, and needs no external aid. Rent averages €5 per square metre per month, plus a provision of around €2.30 per month for heat, power, insurance and common services. Crucially, tenants do not need to put up a guarantee, making the centre accessible to entrepreneurs with no capital of their own.

A nucleus for neighbourhood renewal

Unemployment and industrial restructuring are no longer such pressing issues as they were when the Gewerbehof was founded 20 years ago. But the centre has an important social role to play in a neighbourhood where 38% of the population is dependent on social welfare payments and 55% is of non-German origin. Mr Nottenbohm finds himself the President of the neighbourhood association Rheinische Straße e.V. The association has a contract with the City of Dortmund for local area improvement (Quartiersmanagement), which involves bringing in local businesses and improving the social situation of the people. Following an EU-wide tender, the association is currently selecting a contractor to manage the contract. The Gewerbehof has the mission to double its size in the coming three years, supporting 100 additional jobs by creating an innovative Business Premises Co-operative (Gewerbeflächengenossenschaft) and doubling the area rented from 5,000 to 10,000 square metres. This will require a switch to a more active style of incubation, as well as a more professional style of management.

In 2017 the Gewerbehof opened a new 400m2 multifunctional space in the nearby empty college building.[1]